The process of diagnosing and tracking the progression of neurological disorders is often long and imprecise, involving surveys, hospital visits, and in-person observations that experts must interpret on the fly. NeuraLight claims it’s built a better way, one that uses nothing but an ordinary webcam and could have a huge effect on how these conditions are treated. The company just secured $ 25M to build out the team and put the method in doctors’ hands.

The lack of standardization is a huge problem in diagnosis and tracking of neurological disorders: because they are so complex and often slow to develop, it is extremely difficult for a single approach to catch something like Alzheimer’s at an early stage.

In fact, it is estimated that misdiagnosis is rife in the field, not due to any lack of rigor by caregivers but simply because of the level of variability in the process. Now imagine if you had a cohort of people diagnosed with a disorder, and as much as a quarter of them may not actually have it – how can you be sure that any treatment you’re testing is effective? This confidence crisis in the data needs an objective metric to be mitigated, and that’s what NeuraLight, based in Austin and Tel Aviv, is building.

CEO Micha Breakstone, having sold his previous company Chorus for $ 575M, met his co-founder Eddie Ben-Ami and was fascinated by the possibilities of his research.

“It’s kind of crazy, but there’s basically no objective markers for neurological disorders. You can’t develop drugs for diseases you can’t measure, ”he said. “He had developed this technology that could glean these micro-parameters from the eye, indicating cognitive load.”

This, along with other eye movements and metrics, have been linked to neurological disorders for years in numerous publications. But it hasn’t been a useful technique for measuring the progress of a disease because it uses specialized equipment and expert analysis.

NeuraLight uses an ordinary off-the-shelf webcam and applies modern image analysis techniques “to extract these, let’s call them sub-pixel or sub-millimeter signals, stuff that isn’t in one frame. We’ve been able to ascertain that we are as accurate, if not more, than a professional gaze tracker that costs tens of thousands of dollars, ”Breakstone said. (“Which is insane,” he added.)

Now, this could be used in clinical contexts in the future, for neurological testing from home, but that’s something that may have to wait on FDA approval and more tests. Fortunately it can be useful even before making any serious medical claims, because the analysis the company does on the ocular imagery can be applied retrospectively to other data, such as clinical trials from the past. And that’s something pharma companies will gladly pay for.

“We’re taking a page from Flatiron here; in essence we’re tagging data, ”Breakstone explained. “For example, if we go and look at a cohort of a thousand people for Parkinsons, and we know 250 don’t suffer from it… if all we did was come in and tag the patients we suspect don’t have it, we can re-analyze the data without it being considered cherry-picking or p-hacking, because it’s new data. You can enormously increase the chances of success without making any regulated claims. ”

There’s been a lot of work in this area, because eye movements have been known to be important indicators of brain health for a long time. But more detail in analysis could yield new results from existing studies, or lead to quicker or better indicator detection in clinical situations. 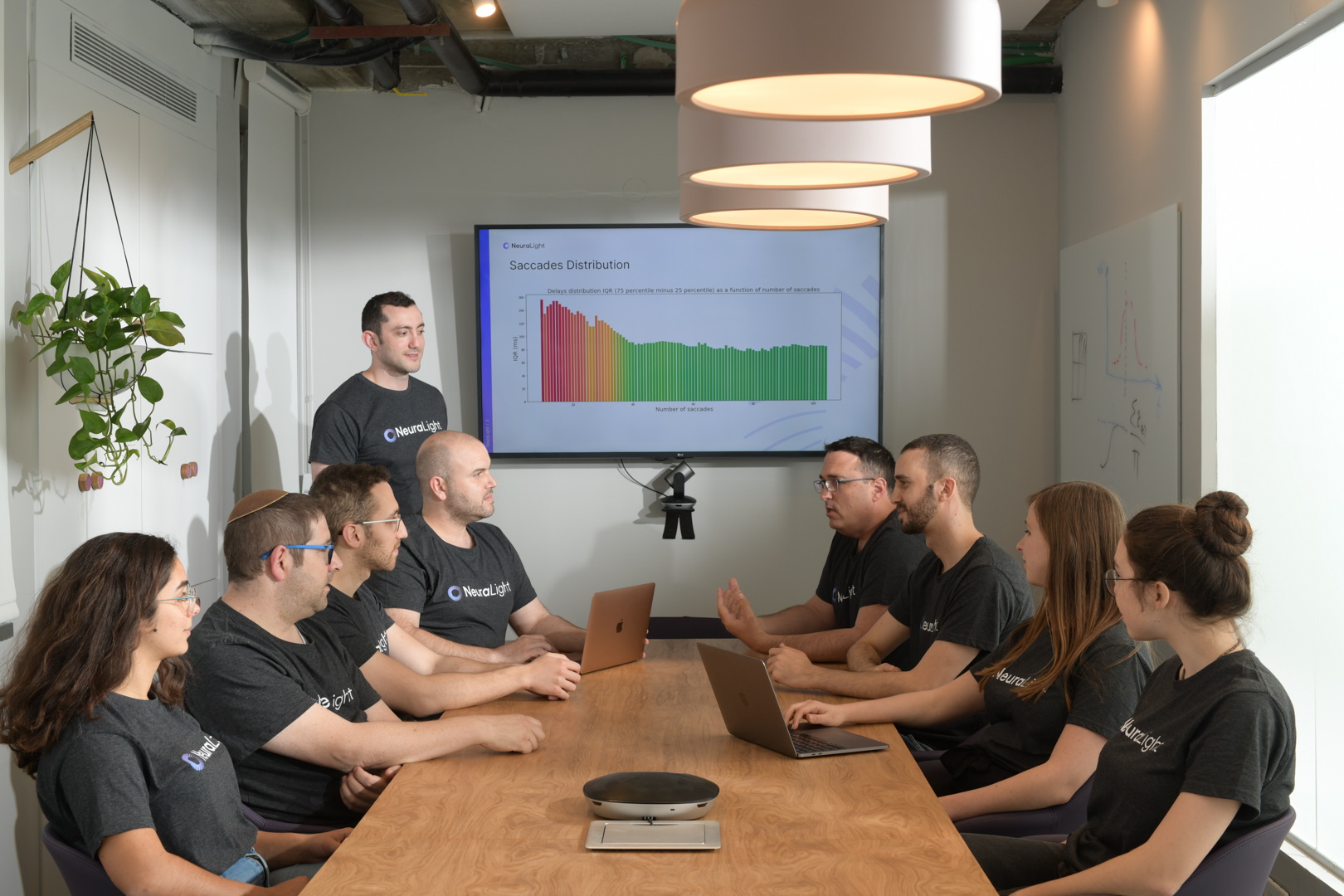 A normal meeting at the NeuraLight office with everyone wearing normal shirts.

As before, there are no claims of diagnosis or treatment here, but as an unprecedented objective measure of neurological disease, NeuraLight’s measurements could still help doctors diagnose and track these conditions.

Tracking in particular is a major issue. It’s difficult enough to get anyone to come to the hospital for tests these days, and far more so if they’re someone with a neurological disorder that’s getting worse. If the indicators for progress or successful treatment were visible via the user’s home webcam, as Breakstone envisions it, “instead of coming to see someone once every quarter – at best – you can do our test twice a week. On any standard Zoom call you’ll be able to get a full neurological evaluation, just by participating in the call – without any stimuli, just passively. ”

That’s still a way off, but they’ve already done tests of hundreds of healthy volunteers for a control group and are about to begin studies to create an agent to detect ALS. For fast-moving variants of this (and other) disorders, it’s incredibly helpful for outcomes if you detect and start treatment earlier, even by a few months.

There are also trials and partnerships underway to build models for identifying signs of Parkinson’s, MS, and Alzheimers, as well as the subtype.

The money will help build out the team, which Breakstone effused about as being world-class already, and continuing to build their infrastructure and product.

“Our end goal is to establish a novel standard for neurological disorders, for progression, monitoring, and diagnosis, but to start with pharma as a decision making tool,” he said. “We’re on an urgent mission to make a real impact – this isn’t academic.”