Currently trading at $ 1.54, popular mobile e-commerce platform ContextLogic (WISH) has seen its shares tumble in price over the past month on investor pessimism surrounding the company’s unimpressive first-quarter performance. And given that WISH continues to grapple with multiple near-term headwinds, is it worth betting on the stock at its current price level? Let’s find out.

Online mobile e-commerce company ContextLogic Inc. (WISH) in San Francisco, operates the e-commerce platform Wish, which offers marketplace and logistics services to merchants. WISH’s shares have plummeted 24.9% in price over the past month and 52.2% year-to-date, driven down by the company’s underwhelming first-quarter earnings performance and continuing headwinds in its business due to reduced user retention and new buyer conversion. Furthermore, the company experienced significant operating losses due to increased advertising costs and brand development expenses.

Closing its last session at $ 1.54, the stock is trading 89.9% below its 52-week high of $ 15.18. With global supply chain woes weighing heavily on the e-commerce player’s active buyers and revenue prospects, the stock could suffer a further pullback in the coming days.

Although WISH has been making efforts to ramp up advertising and launch new initiatives, including the launch of a Women’s Fashion Category, we think the company’s growing dependence on Chinese merchants as it continues to struggle with quality issues could make investors anxious about the stock. 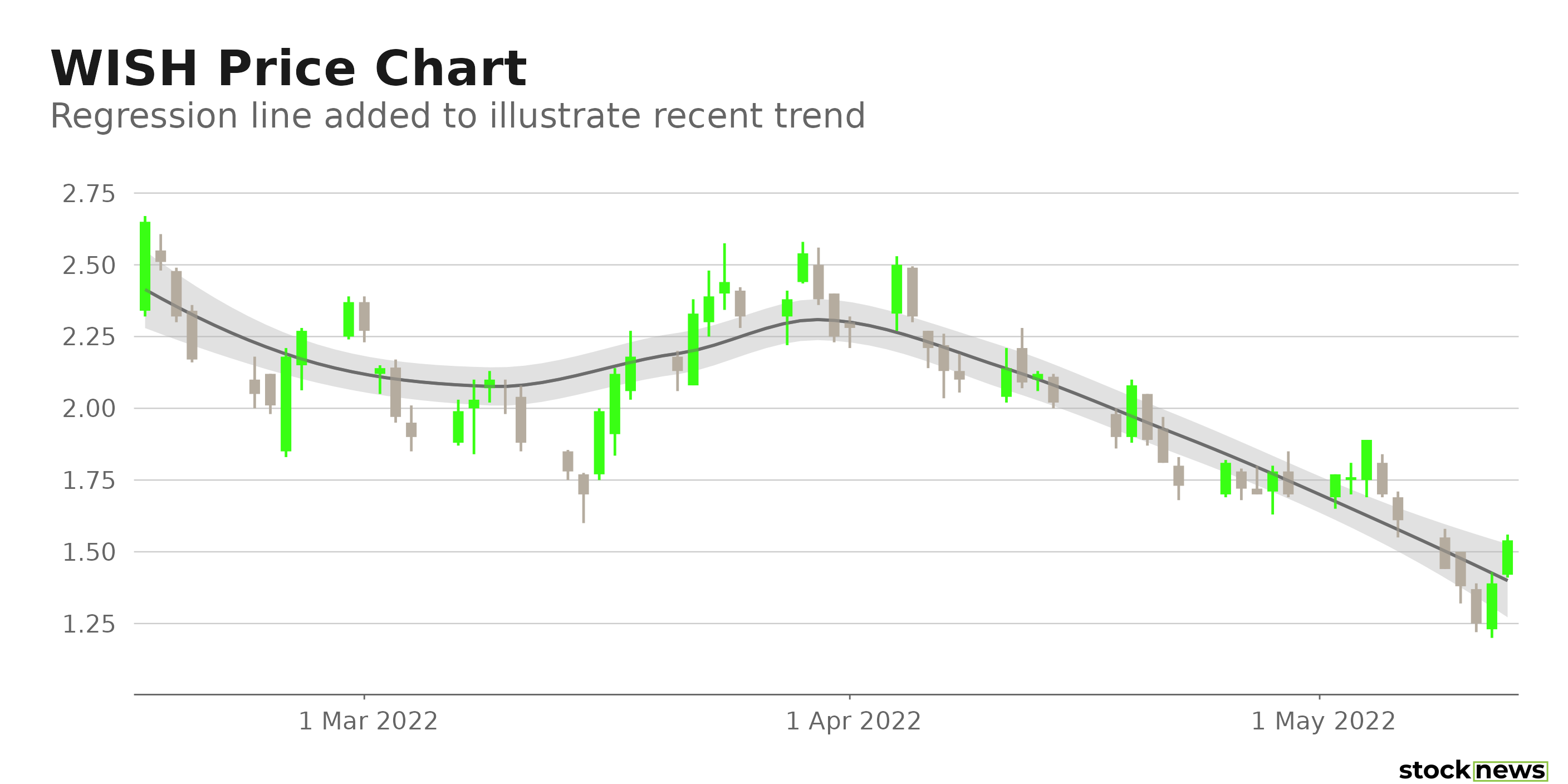 Here is what could influence WISH’s performance in the near term:

Furthermore, last year, French regulators ordered search engines and online platforms to remove WISH from their listings due to concerns surrounding product safety. As the company continues to struggle with quality concerns and shipping issues that are disrupting the delivery of its merchants’ products to its users, the popular e-commerce site’s stock could take a hit.

WISH’s total revenue came in at $ 189 million for the first quarter, ended March 31, 2022, down 76% year-over-year. Its core marketplace revenue declined 81%, while its logistics revenue declined 65%. Furthermore, its operating loss stood at at $ 62 million for the quarter, while its net loss came in at $ 60 million. The company’s cash flow from operating activities was negative $ 146 million, while its free cash flow stood at negative $ 148 million. In addition, WISH reported adjusted EBITDA of negative $ 40 million, and its adjusted EBITDA margin came in at negative 21%.

Analysts expect WISH’s revenues to be $ 887.03 million in its fiscal 2022, indicating a 57.5% decline year-over-year. Furthermore, its EPS is expected to remain negative this year and next year. In addition, the negative $ 0.17 consensus EPS estimate indicates a 70% decline from its year-ago value. And its EPS is expected to decline 7% year-over-year in the current year to a negative $ 0.61.

WISH has an overall D rating, which translates to Sell in our POWR Ratings system. The POWR Ratings are calculated by considering 118 distinct factors with each factor weighted to an optimal degree.

Our proprietary rating system also evaluates each stock based on eight distinct categories. WISH has a C grade for Quality. This reflects the stock’s negative ROE, ROA, and ROTC.

In terms of Sentiment grade, the company has a D, reflective of a bearish analyst sentiment surrounding the stock. Also, it has an F grade for Stability.

Beyond the grades I have highlighted, one can check out additional WISH ratings for Value, Growth, and Momentum here. Among the 71 stocks in the F-rated Internet industry, WISH is ranked # 53.

In its recently released SEC filing, the mobile e-commerce operator stated that it expects losses from operations to continue for the near future as it suffers costs and expenses related to the development of its brand. In fact, the company’s poor financial health and a decline in user retention and conversion could negatively impact its growth. Furthermore, headwinds related to supply chain disruptions and quality issues and their impact on the company’s business have raised investor concerns surrounding the stock. So, we think it is best avoided now.

How Does ContextLogic (WISH) Stack Up Against Its Peers?

While WISH has an overall D (Sell) rating in our proprietary rating system, one might want to consider taking a look at its peer industry, Yelp Inc. (YELP), which has an A (Strong Buy) rating.

What To Do Next?

If you would like to see more top stocks under $ 10, then you should check out our free special report:

3 Stocks to DOUBLE This Year

What gives these stocks the right stuff to become big winners?

First, because they are all low-priced companies with explosive growth potential, that excel in key areas of growth, sentiment and momentum.

But even more important is that they are all top Buy rated stocks according to our coveted POWR Ratings system, Yes, that same system where top-rated stocks have averaged a + 31.10% annual return.

Click below now to see these 3 exciting stocks which could double (or more!) In the year ahead:

3 Stocks to DOUBLE This Year

About the Author: Imon Ghosh

Imon is an investment analyst and journalist with an enthusiasm for financial research and writing. She began her career at Kantar IMRB, a leading market research and consumer consulting organization.

The post Is ContextLogic a Buy Under $ 2? appeared first on StockNews.com