Shares of leading insurance provider Allstate Corporation (ALL) have dipped in price recently as inflation continues to weigh heavy on its financials. Although the company has seen higher growth in premiums due to policy growth, given that increases in claim severity in a higher interest rate and a higher inflation rate environment could hurt its profitability, is it worth betting on the stock now? Let’s find out.

Leading publicly held insurance provider The Allstate Corporation (ALL) in Northfield Township, Ill., Offers property and casualty and other insurance products in the United States and Canada. The company reported premiums of $ 11 billion in the first quarter of 2022, up 6.5% year-over-year, driven by increased policy growth and an increase in average premiums. Also, solid investment income and earnings from its Protection Services and Health and Benefits business segment could allow the insurer to grow its competitive position in the market significantly.

However, ALL’s shares have declined 8.5% in price over the past month and 8% over the past year. The stock is currently trading lower than its 50-day moving average of $ 133.59 but higher than its 200-day moving average of $ 126.17, which does not indicate a robust uptrend. Because the current inflationary environment could continue to affect its bottom-line growth adversely, the insurance provider’s stock price could pullback in the near term.

While the company’s expense reduction goals could help normalize its operations amid a volatile environment, finding more growth may be challenging, given its rising losses on fixed-income sales and lower auto insurance margins. 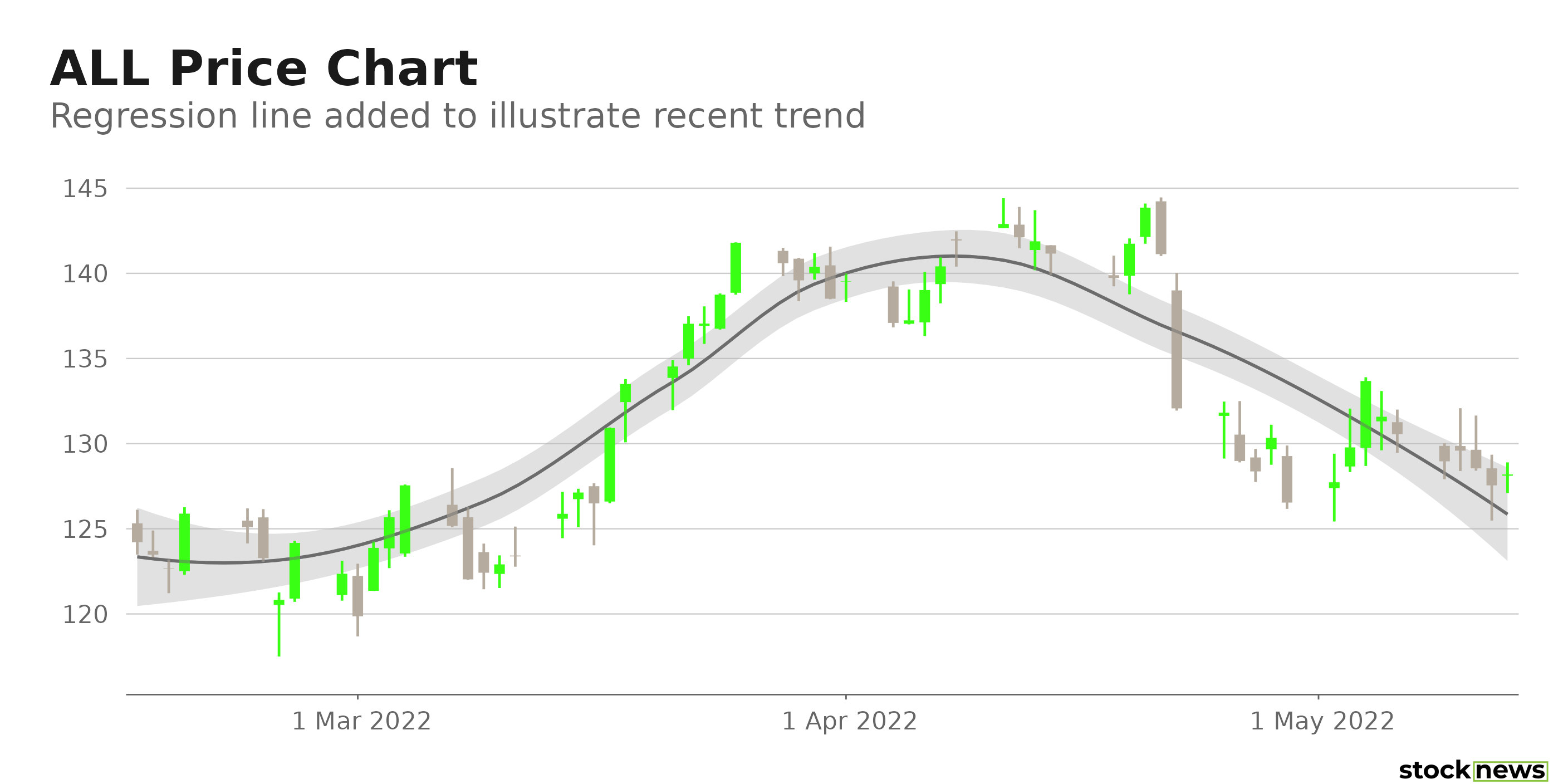 Here is what could influence ALL’s performance in the coming months:

According to the latest report from the Bureau of Labor Statistics, the consumer price index for all items rose 8.3% from a year ago, still close to the highest level since the summer of 1982. In response to rising inflation, the Federal Reserve has increased its benchmark interest rate by seventy five basis points so far this year. The combination of a higher interest rate and inflationary pressure could lead to rising insurance claims costs. As a result, the financials and operations of insurance providers like ALL could be negatively impacted. Furthermore, a jump in the auto and homeowners claims severity, mainly due to rising inflationary impact, could affect ALL’s underwriting income and profitability.

ALL’s net revenue declined 0.9% year-over-year to $ 12.3 billion for the first quarter ended March 31, 2022, due primarily to losses on fixed-income sales and equity valuations in 2022. Its market-based investment income declined 8.8% year- over-year to $ 323 million, while its total return on investment portfolio stood at a negative 2.8%. The insurance company’s total costs and expenses came in at $ 11.54 billion, representing a 22.5% increase year-over-year. But ALL’s Protection Services revenue rose 13.6% from the prior-year quarter to $ 627 million over this period, driven mainly by Allstate Protection Plans. Furthermore, its premium earned from property liability rose 6.1% year-over-year to $ 10.5 billion, due to higher average premiums and item growth in the National General and Allstate brands.

ALL has an overall C rating, which translates to Neutral in our POWR Ratings system. The POWR Ratings are calculated by considering 118 distinct factors with each factor weighted to an optimal degree.

Our proprietary rating system also evaluates each stock based on eight distinct categories. ALL has an F grade for Growth and a C for Value. The stock’s mixed growth prospects and higher-than-industry valuation multiples justify these grades.

In terms of Momentum Grade, ALL has a C. The stock’s price return over the past month is consistent with the grade.

Beyond the grades I have highlighted, one can check out additional ALL ratings for Sentiment, Stability, and Quality here. ALL is ranked # 24 of 56 stocks in the C-rated Insurance – Property & Casualty industry.

While a significant surge in the premiums earned from both the National General and Allstate brands and earnings from Protection Services and Health and Benefits segment have helped ALL progress in its growth strategy, growing inflationary pressure and the Fed’s efforts to raise interest rates aggressively could cause the stock to retreat in the near term. Furthermore, the company’s unstable growth potential and a higher claims severity could add to investors’ concerns surrounding the stock. So, we think investors should wait for some improvement in its prospects before investing in the stock.

How Does the Allstate Corporation (ALL) Stack Up Against its Peers?

While ALL has a C rating in our proprietary rating system, one might want to consider taking a look at its industry peers, Protective Insurance Corporation (PTVCB), and MS&AD Insurance Group Holdings, Inc. (MSADY) which have an A (Strong Buy) rating.

ALL shares were unchanged in premarket trading Monday. Year-to-date, ALL has gained 9.73%, versus a -15.16% rise in the benchmark S&P 500 index during the same period.

About the Author: Imon Ghosh

Imon is an investment analyst and journalist with an enthusiasm for financial research and writing. She began her career at Kantar IMRB, a leading market research and consumer consulting organization.

The post Is Allstate a Winner in the Insurance Industry? appeared first on StockNews.com