Michael Broughton was the first in his family to go to college. But he almost did not, when he had trouble securing the necessary financing to pay his tuition.

The experience stuck with him, and when he met Ayush Jain at the University of Southern California, the pair bonded over their belief that credit access should be free. They came up with the idea of ​​helping people build credit through recurring payment forms such as digital subscriptions to Netflix, Spotify and Hulu.

In December 2019, they started Altro – which started out as Perch Credit – and began hunkering down in a Hacker House with a few others to build out a platform that finds a person’s recurring transactions and connects them to a trade line that it reports to all three credit bureaus. For the unacquainted, a trade line is a line of data that goes directly into a bureau’s system that affects a person’s FICO score, which is used for underwriting.

“What we built is not an alternative or supplemental, ”Broughton said. “We’re not creating our own score, but rather it is a direct correlation to your actual score being improved over time, which a user can see in our app.”

“The users would be paying a charge anyway, but a percentage goes to us, rather than the companies,” Broughton told TechCrunch. “We do not want to charge users for access to something they already have.”

The company attended pitch competition after pitch competition, raising about a total of $ 100,000, until one day in the summer of 2020 an analyst for musician Jay-Z’s Marcy Ventures happened to be in the audience.

The day after, the firm wrote a $ 250,000 check into the company, kicking off its seed round and prompting Broughton to drop out of college to focus on growing Altro.

“It was a 48-hour turnaround, and it was the first money we’d ever raised outside of pitch competitions,” he told TechCrunch.

By the time it raised its $ 2.5 million seed round in December 2020 in a round that included participation from Citigroup and SoftBank Opportunity Fund – among others – Altro had a couple of thousand customers. By 2021, the app had gone viral after Jay-Z’s Marcy Ventures wrote a blog post about it.

“We had over 200,000 downloads and shot up to the top 10 in the App Store,” Broughton recalls. “Thousands of videos were made about Jay-Z changing how people think about credit. We had to put up a waitlist. ” 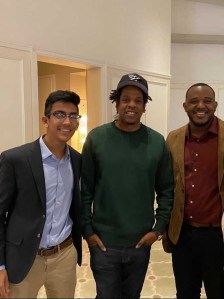 The company, as overwhelmed as it was, told people on the waitlist that if they needed immediate access to credit to let them know. In 24 hours, it had over 3,000 responses with people sharing very honest stories like they were stuck in abusive households and needed credit to get out.

Altro went on to participate in Y Combinator’s Summer 2020 batch.

And today, the startup is announcing it has raised $ 18 million in a Series A funding round led by Pendulum, with participation from Marcy Ventures, as well as Citi Ventures, Black Capital Fund, Concrete Rose Fund and individual investors such as Dick Parsons and Deborah Quazzo, among others.

Altro plans to use its new capital to continue growing its credit and financial literacy program as well as grow its team. For example, Altro is focused on educating users through a catalog of over 350 educational audio clips covering topics like cryptocurrency, investing and trading. Watching the snippets, the company says, not only allows users to become more financially savvy, but also positively impact users’ scores the more they engage.

“A lot of our marketing has been earned, we haven’t put a dollar into it yet,” Broughton said. “But now we need to build a marketing team so we can help more people on a per user basis and expand the brand.”

It also plans to soon allow people to build credit through making rent payments on time, an offering that was available on its platform earlier on and is being brought back in coming months.

It was important to Broughton and Jain that their app be completely free for users, as they viewed services that charged users for access to credit as predatory. So Altro monetizes off interchange, or rather the activity done off of the spend. The company’s subscription partners are paying Altro a fixed percentage of what its users are paying to them directly. In a nutshell, Altro has built relationships with Visa and Mastercard, which give the startup a percentage of the activity done to those vendors.

Joanna Rees, a current FICO board member and partner at venture studio Westhas joined Altro’s board as part of its new financing and is an investor in the company.

Rees told TechCrunch she was inspired by Broughton.

“His life experience and purpose in creating the company were coming from a place of personally understood need and authenticity, ”she said. “I also understand the immediate opportunity to further expand the credit market informed by my board role at FICO.”

She went on to say that as its name implies – Altro means “other” in Italian – the startup is able to count other payments that people make to demonstrate credit worthiness, which she and others at FICO believe is unique to the market.

“Subscription data in particular is a big opportunity,” Rees told TechCrunch. “Altro is combining this with accessible educational content that will enable the ‘others’ to participate in the credit markets and the benefits that provides to enhance the quality of their lives.

““The fact that a military kid raised abroad was unable to access credit spoke to a deeply flawed system, and his resolve to fix the problem he himself had experienced was compelling,” he told TechCrunch. “There are 45 million underbanked Americans in the United States, many of whom are people of color. The lack of access to credit is fundamentally preventing them from bettering their families’ livelihoods. Platforms like Altro can foster change that will improve peoples’ lives and also help this country achieve greater economic potential. ”